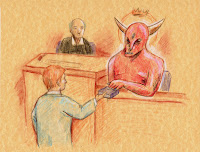 I have to deviate from my projected course and go on a little bit of a rant.  I am sure that you won't mind.  I just watched the movie "Suing the Devil."  At the Foundry Church we have an independent film night where we show independent films from young film makers. I don't know what happens normally, and I understand that we don't normally show a "Christian" movie, but I think with the hype and the press surrounding this movie, we made an exception. (and by we I mean the people who run this ministry). The Foundry church is an arts oriented congregation and have many filmmakers that cross our paths.

Well anyway Let me discuss the good points.  First of all the premise of the movie is decent.  A young law student is tired of seeing bad things happen in this world and in his life.  He blames Satan for all of the evil in this world and decides he needs to do something about it. So he starts a lawsuit to sue the devil.  (that much you could probably ascertain from the title of the movie).  Well, the unexpected happens (more so to create a plot than to make a statement) a man who claims to be Satan actually shows up to defend himself.  He has with him a team of lawyers to win this case.  Great concept.  Malcolm McDowell plays Satan and does a descent job.  Also Corbin Bernsen and Tom Sizemore also make appearances in this movie, increasing the acting caliber a little (at least in name recognition.)  And Rebecca St James also makes an appearance in the film.

This movie lives up to almost everything I expected from a Christian movie.  It tried hard to be relevant and make a unique point.  However, it also tried to make several other points while it was on its way.  I am not sure what it was saying or to whom it was saying it.  It wandered all around the evangelical Christian doctrines of free will, the nature of evil, the origin of Satan, and the spiritual war between good and evil without landing firmly anywhere.  The acting was bad to say the least with the exception of a decent speech from McDowell, and Bernsen played his small part rather well.  The editing was choppy and the plot did not make sense.  As I said everything i come to expect from a Christian movie.  The only thing it didn't have was a deep Christian gospel/salvation moment, or a rapture event at the end (sorry for that spoiler (not really, but it was nice to feign an apology there)).

I am waiting for Christian movies of quality.  I would love to see a Christian movie that has good actors, a decently written script, impeccable directing, and some killer special effects. I understand that Christian directors and filmmakers need to pander to some religious patrons who are spending money to produce something and they have to add certain elements that are expected to be there.  They probably need a Gospel presentation or a rapture event to make producers happy, and to present a movie that might lead someone to Christ, but what they end up making is low quality uninteresting films that people are disappointed that they spent time and money to watch.  We as Christians claim to serve the creator of the universe.  We claim to want to give God our best, but we end up only giving Him what we think will save people.

The Bible says this:
"Whatever you do, whether in word or deed, do it in the name of the Lord Jesus giving thanks to the Father through Him."  Colossians 3:17

We should be giving God the best.  We should strive for excellence in all that we do including our art and our movies. We must ask ourselves Is God happy with our mediocrity?  Is God glorified with our poorly done movies or is He happy that we made something for him?  Does God expect more from us on this front?  I know I do.

I am still seeking a good quality Christian movie, and I hope that one day I will find one.  "Suing the Devil" was not that movie.  The search continues