Since I am not a member of a church that is liturgical in the sense that we do not not follow the traditional church calendar nor do we attend to all of the rights and rituals that relegate and determine the processes of worship services and other special events, and I do not follow a lectionary which dictates which scripture and what passages I am to read from or preach on any given Sunday I have been preaching an independent series on a topic that is mostly unrelated to Lent.  (that was a long sentence someone might have to check my grammar on that one. I'm not sure if I could have purposely written that had I planned it.)

Anyway the series I had started just before Lent was about the story and the Book of Ruth.  The reason was to finish a series that I started last semester about the genealogy of Jesus, where my intent was to show the documented Biblical stories of the individuals found in the listed ancestors of Jesus in Matthew chapter 1.  I specifically waited to speak on Ruth until February 14th ish.  I know I chose the cheesy let's talk about a romance story on Valentine's Day.  Hey it has worked for so many other preachers, on many different occasions, and it will work again.

So Every time I read about Ruth, people (and by people, I mean commentators, theologians and other hoity toity religious type individuals) call it a story of redemption.  I never put a lot of stock in what everyone is saying about it. So I did my own reading and some outside cross-referencing that was unusually difficult.

The story begins, as all good Biblical stories do, with a famine.   Elimilech, his wife Naomi, and his sons move to Moab.  There Elimilech dies (of what I could only guess.  the story doesn't say so I labeled it as Sudden Male Death Syndrome, or SMDS).  His sons then marry Moabitesses (women of Moab), Ruth and Orpah.  Well while in Moab, Naomi's sons die. (more victims of SMDS).  Naomi tells her daughters-in-law to go back to their people.  Orpah leaves without question however Ruth says:

16 ..., “Do not urge me to leave you or turn back from following you; for where you go, I will go, and where you lodge, I will lodge. Your people shall be my people, and your God, my God. 17 Where you die, I will die, and there I will be buried. Thus may the LORD do to me, and worse, if anything but death parts you and me.

She committed herself to Naomi.

Here are a couple of points that I pulled out.  First of all Deuteronomy 23:3-6
3 No Ammonite or Moabite shall enter the assembly of the LORD; none of their descendants, even to the tenth generation, shall ever enter the assembly of the LORD, 4 because they did not meet you with [a]food and water on the way when you came out of Egypt, and because they hired against you Balaam the son of Beor from Pethor of [b]Mesopotamia, to curse you. 5 Nevertheless, the LORD your God was not willing to listen to Balaam, but the LORD your God turned the curse into a blessing for you because the LORD your God loves you. 6 You shall never seek their peace or their prosperity all your days.

This is crucial to understand the complexity of the Book of Ruth and how scandalous the whole situation was.  She was from Moab and the people of Israel should have nothing to do with her. It is a command from God, and one that they must hold to. 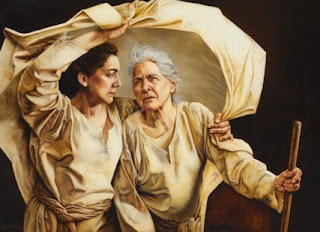 It is Ruth's commitment to Naomi that gives Naomi value.  Two worthless women return to Bethlehem but they have given each other worth in at least someone's eyes.  The lesson I drew out in the sermon was our job is to give value to people.  Our commitment to people to spend time with them and forge relationships with people is what gives them value.  God does not see worthless people, we do.  However, we must see people as God sees them, as valuable and priceless. This is the beginning of Redemption.  People valuing people and providing them the means to find value for themselves.

The final thing to consider is the first verse of the book (and this was pointed out to me after I preached the first sermon) : "Now it came about in the days when the judges [a]governed..."

This all happened in the times of the Judges where "Everyone did what was right in their own eyes."  I'm still not sure how that fits into the understanding of the book, but I will have that worked out by the end of the week. (I hope)