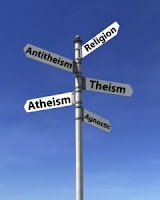 I call this How to Create an Atheist in 6 Easy Steps, and if we as the church will follow these steps then we can have bonafide atheists.
Posted by Unknown at 3/07/2013 01:37:00 PM