I mentioned the Forge yesterday without explaining what that is.  To explain what the Forge is gets into the history of how I became a campus minister.  The Forge is a worship service that meets on the campus of Widener University.  It is technically the evening service of the Foundry Church www.thefoundrychurch.org
We have been meeting on campus for two years now.  The story is that Pastor Chuck Keiffer was talking with the provost of the University and was asking the provost what we as a church could do to transport students to our services which was only a mile away.  The provost suggested that we move one of our services on campus.  They were already doing a Catholic Mass so a protestant service was not out of the question. So we moved our Sunday night service onto campus and called it The Foundry at Widener. 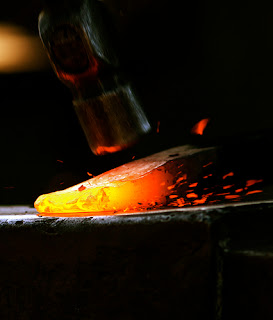 Meanwhile I had been serving at the Foundry for 3 years.  I have been a youth minister, associate pastor, drama director, elder and have filled in whenever and wherever I was needed.  The name "the Forge" had been  in my head and heart for some time.  I offered it as a name for our children's ministry, but did not work.  I had thought about it for the youth ministry, which already had the name fusion.  (the youth ministry was out of control and had to be eliminated in at least in the form that it had existed.) Finally, I saw that the name "The Foundry at Widener" was a little long and complicated, especially when it was held at the Foundry.  Then it became the Foundry at Widener at the Foundry and that just got too complicated.  Plus I felt the name limited community involvement.  So I began to call the service at Widener "The Forge."  A forge is a place where metal is heated shaped and formed into something useful and effective.  I thought this was a fitting name for a worship service on a college campus, a place where ideas and adults are formed and tested.  This is the concept of the Forge.  To form and challenge the faith of individuals and to test their strength in the Word and Spirit of God.  I gave the tag line to the Forge of it being a place where Questions are answered and Answers are Questioned.  Taking the raw elements of faith that the students had been given to them by their parents and ministers and forming a disciple and a faith that can carry them throughout their lives.  This is my job.  This is my ministry.